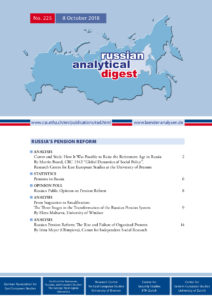 At the end of September, the Russian Parliament passed a law increasing the retirement age by five years to 60 for women and 65 for men. The aim was to move toward sustainable finances for the Russian Pension Fund, but the move proved extremely unpopular. In the light of considerable protests against the reform announced in June—just hours before the opening of the World Cup—the government was forced to react to popular discontent with a public debate and concessions.

In the Shadow of the World Cup This summer, the Russian government faced a dilemma that was difficult to resolve: For years, the Russian Pension Fund (PFR) has been in deficit as the pension contributions fall far short of covering current expenditures on old-age pensions. Therefore, when public attention was focused on the World Cup and public protests were restricted for security reasons, Prime Minister Dmitry Medvedev announced a painful solution to the problem: Women should work eight years longer, men five. However, the project has led to public discontent for at least three crucial reasons: First, pension reform threatens the social security of people aged 55–65. Second, due to corruption and nepotism, the political elite seems to lack the legitimacy to carry out reforms that deeply affect people’s lives.. Third, the current pension age of 55 years for women and 60 for men has enormous symbolic significance. For many people in Russia it seems to be a kind of last bastion for the defence of social achievements from Soviet times.

Accordingly, there was broad public opposition to the government’s plan to raise the retirement age—ranging from the systemic opposition parties in the Duma (in this case all parties except United Russia) to the trade unions and the movement of Alexei Navalny. Regular demonstrations have taken place throughout the country since July. In polls and elections, approval for both Vladimir Putin and United Russia fell after the reform plans were announced.
The crucial question in early fall 2018 was therefore: Will the government of Prime Minister Medvedev find a way to pass the reform?

In order to understand the rationale behind the planned increase in the retirement age, it is worth first taking a look at the three central problems in how Russia provides for its senior citizens: 1) the deficit in the pension fund, 2) demographic development and 3) low pension benefits.

The core economic problem of the pension system is the deficit of the Pension Fund. It amounts to about one third of pension expenditure and must be covered year after year by subsidies from the federal state budget (see Table 1 on p. 7). The shortfall is problematic for two reasons: On the one hand, financing from the federal budget contradicts the principle of a contributory pension system in which current old-age pensions are paid out of current employees’ pension contributions (In Russia, employers cover all of the pension contributions and employees do not contribute directly). On the other hand—and this is the really serious problem—the subsidies place a considerable burden on the federal state budget. Slightly more than one fifth of total federal government expenditures flow into the Pension Fund (see Table 1 on p. 7). At a time when Russia’s economic development is stagnating (due to the low oil price, Western sanctions and structural problems) and the pressure to consolidate the state budget is growing, these subsidies to the Pension Fund are a prime target for austerity efforts.

Another problem of old-age provision in Russia is the demographic situation. Russia’s society is ageing—and according to the UN World Population Prospect, this trend will continue in the coming decades, even if the birth rate has risen significantly in recent years thanks to financial incentives for families. Since 2010, the number of pensioners has risen by almost four million, while the number of people employed has stagnated for three years. There are only 1.7 employed people per pension recipient. Almost one third (30%) of all people in Russia receive an old-age pension (see Table 2 on p. 7).

Although the trend towards ageing societies is putting pressure on pension systems worldwide, compared with many OECD countries, the ratio of employed people to pensioners in Russia is low.

Compounding these issues, the third fundamental problem is the relatively low level of the pensions. The pension level for an average earner is currently around one third (34%) of the former wage. This figure, too, is low compared to many OECD countries. That’s why almost one in four pensioners in Russia continues to work, especially in the early years of retirement (see Table 2 on p. 7). Accordingly, for younger pensioners, in particular, the old-age pension often serves as a kind of basic income that must be topped up through gainful employment. Inactive pensioners, on the other hand, are particularly at risk of poverty.

Pension Reforms of the Past

These core structural problems of pension provision in Russia have existed for a long time. Over the past 20 years, they have led to numerous reforms aimed at stabilising the pension system in the long term:

The retirement age of 55/60 (women/men) years inherited from the Soviet Union is one of the lowest in the world. It is therefore not surprising that, since their independence, almost all post-Soviet states except Uzbekistan have raised the retirement age—most recently Belarus and Ukraine in 2017. In June 2018, the Russian government under Prime Minister Dmitry Medvedev broke the taboo and announced, with reference to international developments, that it would raise the retirement age in Russia. The aim, it said, was to create a sustainable financing basis for old-age provision and to increase pension payments. The first draft law contained the following detailed provisions:

This bill was adopted on 19 July after its first reading with the votes of the United Russia (UR) parliamentary group (only one member of UR voted against). The members of all other parliamentary groups present (KPRF, LDPR and A Just Russia) voted unanimously against.

This Duma voting reflects the widespread unpopularity of the pension reform plan among the population. Surveys by opinion research institutes Levada and FOM show clearly: The vast majority of the population (between 80 and 90 percent) strongly oppose a higher retirement age. Within a few days after the Prime Minister announced the reform plan, the approval ratings for Dmitry Medvedev, Vladimir Putin, the Russian government and the party United Russia dropped by 10 to 15 percent. What’s more, the political protest potential also rose sharply. In a survey conducted by the Levada Center, more than a third of the population said that they were ready to take part in rallies against the pension reform if such demonstrations were to take place in their city.

However, resistance to the pension reform is not only manifested in surveys. Almost three million people signed an online petition by the independent trade union centre “Confederation of Labour of Russia” (KTR) against raising the retirement age. In many Russian cities, people took to the streets. Several hundred to several thousand demonstrators took part in each of the 100 plus demonstrations nationwide. Ultimately, it was not so much the number of demonstrations and participants that attracted attention, but the broad spectrum of organisers. Rally leaders included representatives of the left-wing (including KPRF, A Just Russia, Left Front), liberal (including Yabloko, PARNAS) and right-wing (LDPR) parties and organizations as well as trade unions (KTR, the official FNPR) and the opposition movement of Alexei Navalny.

The authorities were accordingly nervous: some demonstrations were banned and there were repeated reports that protesters were arrested. In August, Sergei Udaltsov, coordinator of the Left Front and one of the leaders during the 2012 protests against Vladimir Putin, as well as Alexei Navalny were each sentenced to 30 days imprisonment. Thus two important figures of the extra-parliamentary opposition were temporarily withdrawn from circulation.

Nevertheless, Navalny’s Anti-Corruption Foundation (FBK) was able to publish two videos in which the Pension Fund and its head Anton Drozdov were accused of embezzlement. Drozdov—a long-time state official, who never worked in the free economy—is said to have real estate worth several million US dollars. Based on these accusations, Navalny’s movement called for nationwide protests against the pension reform on 9 September—the day of regional and local elections in Russia. Security authorities responded to these protests with violence and, according to information from OVD-Info, arrested 1,195 people, mainly in St. Petersburg.

Faced with protests and resistance, the regime felt compelled to initiate a political process in order to enclose the emerging conflict in society. This process consisted of three elements:

The aim of the public parliamentary hearing in the Duma was to imitate a public debate. Yet the framework of this discussion had already been defined by the Medvedev government’s draft law. So the hearing was all about justifying the need for a higher retirement age and to articulate proposals for changes on details. Only the leaders of the three opposition parliamentary groups (KPRF, LDPR and A Just Russia) and the representative of the Confederation of Labour of Russia voiced fundamental criticism of the retirement age increase (see the overview given in the appendix). Nevertheless, the debate served an important purpose: A range of stakeholders were able to express the concerns of their clientele and argue for improvements. Thus, the debate served as a platform for the public to respond to the government’s reform plan—but not as platform for competing political ideas.

Finally, President Putin intervened personally in the debate and explained by televised address why a higher retirement age was necessary. At the same time, he formulated changes to the draft law in order to soften its social consequences as far as possible:

This ping-pong game with suggestions from the government, which are publicly weakened by the president, was widely expected. Putin’s proposed changes failed, however, to prevent nationwide demonstrations on 9 September and the decline of United Russia’s popularity in many regions. Less than a third (29%) of the Russians believe that Putin’s proposals actually improved the pension reform that had been announced earlier in the summer.

Finally, the pension reform was passed on 26/27 September in its second and third readings in parliament. Putin’s proposed changes were adopted unanimously (even the opposition voted in favour), then the law to raise the retirement age was passed with the votes of United Russia and against the votes of the opposition. The increase in the retirement age is flanked by a number of other laws that react on some key arguments by opponents:

Within a little over 100 days, Russia has implemented a pension reform that had been taboo for many years: the retirement age was increased by five years to 60 for women and 65 for men. But although there were rational reasons for doing so, the overwhelming majority of people in Russia opposed the reform. That the changes could nevertheless be implemented within a short time is a vivid example of how the technology of governance in Russia works.

First, a strategically opportune time was chosen to announce the raising of the retirement age. In June many people in Russia turned their attention to the World Cup and at the same time the right to hold demonstrations in the host-cities was restricted. Then a strategy of repressions and concessions followed in response to the burgeoning protests: demonstration bans, arrests, violence and electoral fraud, on the one hand, and a guided debate that led to expected compromises, on the other.

Was this carrot (a relatively small one) and stick approach successful? Most likely. The reform passed and although a broad majority still rejects raising the retirement age, the protest potential has clearly decreased in September. What remains, however, are fears of social decline and poverty, especially among those directly affected by the pension reform, and considerable distrust in the political elite, who are widely perceived as corrupt. But these problems seem to be calculable for the political regime.

Martin Brand is research fellow at the CRC 1342 “Global Dynamics of Social Policy,” Research Centre for East European Studies at the University of Bremen, where he is working on poverty policy in the post-Soviet era. He is doing his doctorate on welfare development in Russia, Belarus and Ukraine.